AdamS, with its seat in Mrągowo, was founded on 21 October 1992 but it started producing PVC construction joinery in 1993. Initially, it employed 7 people and manufactured Panorama windows at 20 Mazurska St. (the company's trade office is situated there now). In the following year, the company's sales grew and its staff increased to include 11 people.

The Panorama system was a relatively modest one and to improve its standing in the market, AdamS started looking for a better system of profiles. In 1995, it switched entirely to manufacturing PVC joinery with the use of the Intertec system. Nowadays, this system – after a merger of profile manufacturers and a series of modifications – is called Aluplast Ideal and is way richer than the original version. In the years to come, the company's staff and sales volume grew systematically.
In 1998, the offer was enriched with aluminium joinery.

The main line of the company's activity is manufacturing high-quality PVC and aluminium joinery. The offer includes a number of PVC profile systems by Aluplast, Brügmann, Schüco, the company's own product line Passiv Lines PLUS and ULTRA as well as aluminium profiles by Aliplast and Sapa, based on Siegenia fittings. The joinery is provided in many stylistic, functional and colour scheme variants. Standard and energy-efficient (Passiv Line) windows are manufactured, according to individual demands of the company's customers.

Now, the company manufactures yearly more than 120,000 PVC windows and aluminium windows, doors, glass-cases and elevation structures. The high quality of products, a rich offer, short delivery times and a professional service have resulted in a significant increase of the company's sales volumes.

A complementary line of the company's activity are construction services related to installing PVC joinery. The company's customers are natural persons, housing cooperatives, construction companies (often developers) and other companies that deal with construction joinery. All windows manufactured by AdamS are of a high quality and have very good values of thermal transmittance. The company has a quality control system in place and a patented method of glazing that reduces the risk of pane cracking during installation.

Its strategy mostly relies on the sale systems created by its networks of trading partners. Actively participating in trade fairs abroad (France, Germany, Italy and Sweden), the company is winning the trust of more and more customers – its present export volumes amount to nearly 40%.

The growing number of foreign customers is nothing but the best proof that the company is still “recognisable for its quality”. Its constant improvements of production processes and investments in technological lines make it the leader in manufacturing high-quality windows.

All the company's achievements wouldn't be possible without its own modern machinery park, fleet vehicles and – above all – without its well-qualified and harmonious team, now totalling to more than 200 people. A family atmosphere, commitment and loyalty to the company guarantee a smooth and high quality process of handling orders.

The company's main intangible assets include the skills of winning customers and properly selecting new structures, a functional and attractive website, an efficient way of profiting from trade fairs both in Poland and abroad (e.g. in Italy, Sweden, Germany, France, Lithuania and Latvia). 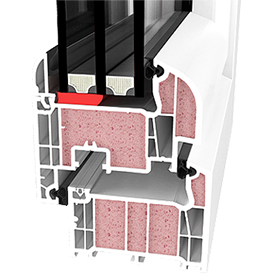 AdamS has its own independent project – it manufactures energy-efficient Passiv-Line windows, a line of windows that is designed especially for energy-saving and passive houses. Thanks to the great energy efficiency and perfect structure of Passiv-Line windows (confirmed by many awards), AdamS can definitely be considered a leader in innovations in this type of construction joinery.

AdamS H. Pędzich, benefiting from UE subsidies, strives to optimise its production processes and is constantly in the search of innovative solutions enabling it to distinguish its offer and gain advantage in a strongly competitive environment.